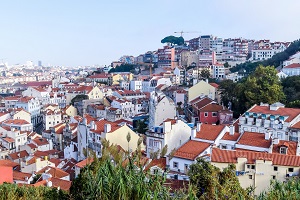 In the 2nd quarter of 2021, the year-on-year growth rate in house prices increased in 9 out of the 11 municipalities with more than 100 thousand inhabitants in the Área Metropolitana de Lisboa, with this acceleration being higher than that observed at national level (+3.7 p.p.) in Lisboa (+9.3 p.p.), Setúbal (+7.1 p.p.), Vila Franca de Xira (+7.0 p.p.) and Cascais (+4.7 p.p.). Lisboa recovered from the negative growth rate observed in the previous quarter but maintained a year-on-year growth rate (+1.4%), much lower than that recorded at national level. Among the six municipalities with more than 100,000 inhabitants in the Área Metropolitana do Porto, Maia (+6.7 p.p.) and Gondomar (+6.3 p.p.) also registered an acceleration in house prices higher than in the country. On the opposite side, Porto (-11.6 p.p.) and Oeiras (-6.4 p.p.) registered the most significant reductions in year-on-year growth rates among municipalities in metropolitan areas.