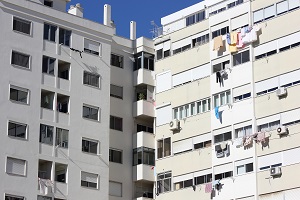 
The Survey on Living and Income Conditions indicates that 9.5% of people lived in a condition of lack of space in 2019, slightly less than in 2018 (9.6%). Housing overcrowding mainly affected residents in the Algarve (17.8% of residents) and in Região Autónoma dos Açores (15.7%).
Around 4.1% of residents lived in a condition of severe housing deprivation, i.e., besides being overcrowded, the dwelling in which they lived also had at least one of the following problems: no indoor bath or shower or flushing toilet; leaking roof, damp walls/floors/foundation, or rot in window frames or floor; insufficient natural light in a sunny day.
The median housing cost burden was 11.0% in 2019, 0.7 pp less than in the previous year.
The overburden housing cost rate, i.e. the percentage of people living in households where the share of housing expenditures to income is over 40%, was 5.7% in 2019, the same as in 2018. The proportion of people affected by the overburden housing cost is higher in the Algarve, Área Metroppolitana de Lisboa and Região Autónoma dos Açores.