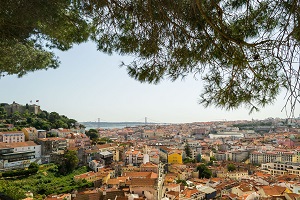 
Statistics Portugal releases the Regional Statistical Yearbooks, which include a wide range of statistical information at regional and municipal levels. From the topics analysed in this press release it is important to highlight:
• Territory: in 2018, almost two thirds of Mainland Portugal was occupied by forest and cropland areas, with the Centro and Norte regions having the largest proportions of forest and cropland area, respectively.
• Population: in 2019, the number of inhabitants in the country increased +0.19% compared to the previous year, reversing the negative annual population growth that occurred in the previous eight years. This positive dynamic occurred in 9 out of the 25 sub-regions of the country, being more expressive in AML (+0.59%) and in Oeste (+0.54%).
• Construction and housing: the Área Metropolitana de Lisboa and Algarve concentrated about three quarters of the total value of urban buildings estates acquired by non-residents in Portugal.
• Regional and local government: in 89 out of the 308 municipalities, the municipalities’ own-source receipt represented more than 50% of the total of receipts from non-financial transactions, with the municipalities of Lisboa, Lagoa and Albufeira scoring the highest values.