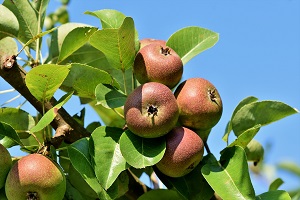 
Early estimates on July 31 point to a yield decrease in fresh fruits and in vineyards. These decreases, compared to previous campaign, are due to a set of adverse situations, namely heterogeneous bud breaks, irregular flowering and extreme weather such as hail or very high temperatures. In this context, reductions of 35% in pear (which will be one of the least productive campaigns of the last two decades), 30% in peach, 20% in apple and 5% in wine grapes are expected. In almonds, a decrease of 5% is expected, mainly as a result of weather conditions at the flowering/fruit setting in Trás-os-Montes region.
In summer crops, the area sown of grain maize is expected to be similar to the previous year, at a time when the prices of this commodity in international markets are relatively stabilized. The tomatoes for processing harvest started at the end of July, and the yield is expected to fall around 10%, vis-à-vis 2019. Rice is also expected to decrease its yield ( 5%), with weed control problems and, occasionally, water shortages. As for irrigated potatoes, projections point to the maintenance of the yield from the previous campaign.
For winter cereals, whose harvest is still taking place in some regions, production should be below 200,000 tonnes for the second year in a row (-5% compared to 2019).