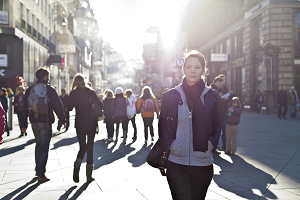 
Between 2018 and 2080, according to the projected central scenario:
Portugal will lose population, from the current 10.3 to 8.2 million people.
The number of young people will decrease from 1.4 to around 1.0 million. Even admitting increases in the total fertility rate, it still results in a decrease in the number of births, as a consequence in the decrease of women at childbearing age, and of the low fertility levels recorded in previous years.
The number of elderly people (65 and over) will increase from 2.2 to 3.0 million.
The aging ratio in Portugal will almost double, from 159 to 300 elderly people for every 100 young people, in 2080, as a result of the decrease in the young population and the increase in the elderly population. The most aged region in 2080 will be the Região Autónoma da Madeira, with this ratio reaching 429 elderly people for every 100 young people, and the least aged region will be the Algarve, with an ratio of 204.
In Portugal, the aging ratio will tend to stabilize only around 2050, when generations born in a context of fertility levels below the generation replacement threshold will be in the age group 65 and over.
The working age population (15 to 64 years old) will decrease from 6.6 to 4.2 million people.
The potential sustainability ratio (ratio between the number of people aged 15 to 64 and the number of people aged 65 and over) may decrease sharply, in view of the decrease in the working age population, together with the increase of the elderly population. This ratio will decrease from 259 to 138 people of working age, for every 100 elderly people, between 2018 and 2080.

The main results of the resident population projections exercise presented in this Press Release are based on hypotheses of future evolution of the demographic components of fertility, mortality and migration. These assumptions did not underlie the impact that the current situation determined by the Covid-19 pandemic may have on future demographic trends. In any case, the information available today is useful to establish a reference to assess future developments.