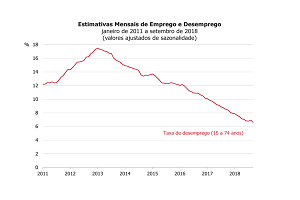 
In August 2018, the unemployment rate was 6.9%, up 0.1 percentage points (p.p.) from the previous month’s level, down 0.1 p.p. from three months before and down 1.8 p.p. from the same month of 2017. That value corresponds to an upwards revision of 0.1 p.p. of the provisional estimate released one month ago. This is the first time, since February 2016, that there has been a monthly increase in the unemployment rate.
In comparison to the previous month, the unemployed population has increased by 2.4% (8.4 thousand more people) and the employed population has increased by 1.3 thousand (to which corresponds a nearly null relative change).
The provisional unemployment rate estimate for September 2018 was 6.6%, down 0.3 p.p. from the previous month’s level.