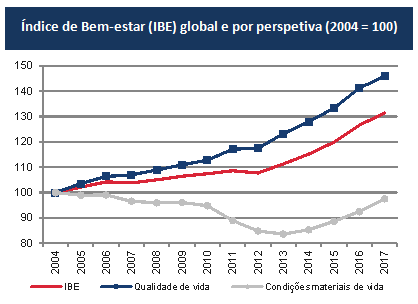 
The Portuguese Well-being Index has positively progressed between 2004 and 2011 and declined in 2012. It recovered in 2013, and the preliminary estimates for 2017 keep this upwards trend, reaching 131.4 (Base: 2004=100), after a result of 126.6 observed for 2016.
The WBI illustrates developments of the well-being using two synthetic indices, which, in turn, reveal two dimensions: Material living conditions and Quality of life.
These two indices have evolved broadly in opposite directions, with the first showing a downward trend, and the second a rising trend; from 2013 they have changed in the same direction: the improvement of well-being in Portugal.
Among the ten domains integrating the WBI (see Technical note), Education and Civic participation and governance are the best performing components during the period under review.
Inversely, Labour and income and Economic vulnerability are the worst performing components, although they have been recovering since 2013.