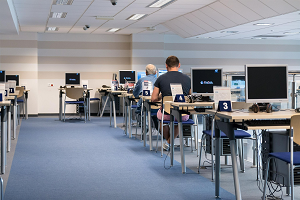 Adult Education Survey
Adult education and training in Portugal: a statistical portrait of a decade - 2016
15 December 2017


In the decade 2007-2016, the participation rate in lifelong learning (LLL) activities increased by 20 percentage points (pp), from 30.9% to 50.2% and covering 2.1 and 3.2 million people, respectively. This increase was mainly due to the participation in non-formal education, which doubled between 2007 and 2016 (from 23.1% to 45.2%).
The non-formal activities were mainly job related.
The participation of the adult population in informal learning activities became widespread, having more than doubled in the decade under review (from 40.8% to 89.4%).
By 2016, more than 70% of the adult population knew at least one foreign language, having this proportion increased by 19.8 pp compared to 2007. English was the best-known foreign language.
Wage premiums increase with education levels, but were lower in 2016 than in 2011.
The association between parents and children's education level - intergenerational transmission of education - is particularly strong in the case of mothers.

See the Study and the Infographic