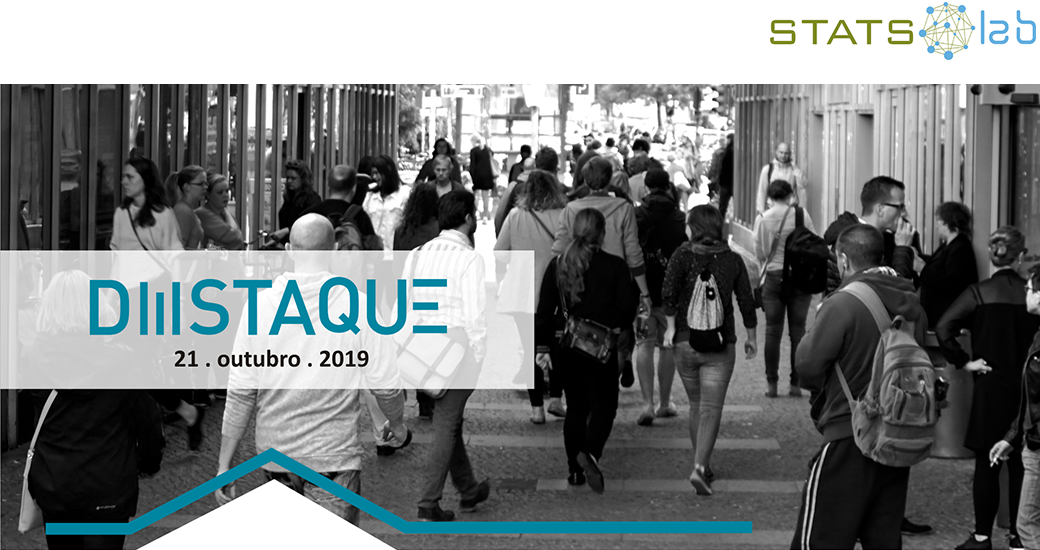 To celebrate the European Statistics Day (20 October), Statistics Portugal announces the progress of the Census with administrative data to be executed after the 2021 Census. This project is part of the National Data Infrastructure that embodies Statistics Portugal's strategy of integration and value creation for society from different data sources. Central to the project is the constitution of the Resident Population Database covering a set of characteristics - geographical, demographic and socio-economic - of the resident population in Portugal and results from the integration of information from various sources of the public administration.


Population and housing censuses represent one of the pillars of any National Statistical System concerning the enumeration and characterization of the population and households, at national, regional and local levels, producing essential indicators for the definition of public policies and decision-making.


Statistics Portugal is working on the transformation of the traditional census model into a more efficient one using administrative data. Due to its dimension, this is perhaps Statistical Portugal´s most ambitious project of data integration from administrative sources.


The project is part of the development of a National Data Infrastructure which embodies Statistics Portugal's strategy of integration and creation of value for society from different data sources. Taking advantage of Statistics Portugal´s competences, tasks and mission, the National Data Infrastructure seeks to respond to an increasingly complex society with new expectations towards statistics.


Within the scope of the Census, Statistics Portugal has been studying the contribution of available administrative data with potential to replace information collected through full enumeration (traditional model) after the 2021 Census.


The project is a key element in the strategy of paradigm shifting and places Portugal in a more favorable position regarding its international obligations, namely the production of annual census statistics after 2024 as recommended by the European Union. 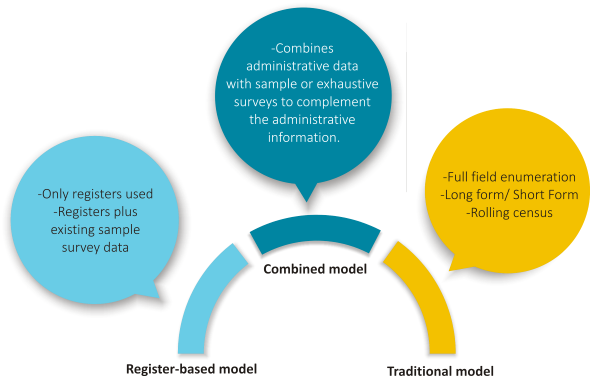 Source: Recommendations for the 2020 Censuses of Population and Housing, United Nations Economic Commission for Europe (UNECE), 2015.


The process of transition to more efficient census model began several decades ago in the Nordic countries. This movement has extended to an increasing number of countries that have evolved into registered-based or combined models.

EVOLUTION OF THE CENSUS MODEL IN UNECE COUNTRIES


Registered-based or combined census models have strong advantages in terms of the efficiency of statistical systems.

MAIN ADVANTAGES OF THE ADMINISTRATIVE CENSUS

In Portugal, the Census with administrative data project was launched in 2014 as part of the feasibility study for a new census model in 2021.


MAIN DATES OF THE CENSUS WITH ADMINISTRATIVE DATA PROJECT

The Resident Population Database is the central element of the Census with administrative data project:

SOURCES OF ADMINISTRATIVE DATA INTEGRATED IN THE RESIDENT POPULATION DATABASE 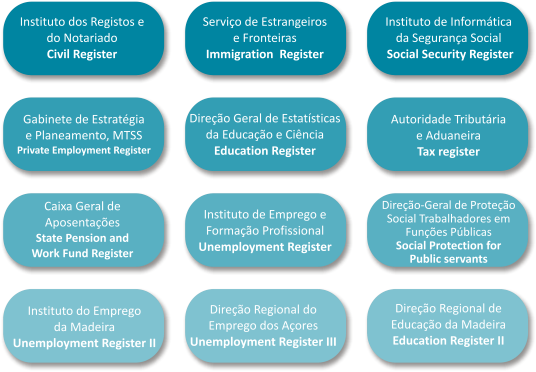 Access to administrative data is granted by a set of legal instruments:
Confidentiality of information is ensured through a set of security measures in the transmission and processing of data, following the principle of statistical confidentiality that rules all Statistics Portugal´s activity. In addition, data are always used for statistical purposes and it is not possible to identify any particular individual or use by third parties.

The creation of the Resident Population Database requires the application of record linkage and matching techniques in order to integrate administrative data from different sources. Portugal does not have a unique identification number, which brings additional challenges to data integration from multiple sources at a record level. In particular, it is necessary to determine whether a person lives in the national territory, which corresponds to the concept of resident population associated with census operations. In order to implement this concept, a set of rules known as "signs of life" is applied. These rules make it possible to validate residency in Portugal considering the presence of the individual in the different administrative data sources (e.g. the individual works, attends the education system, pays taxes, is registered in the employment office,...).


Once the resident population has been estimated, the administrative variables of census interest, which allow for the characterization of the population in different domains, are subsequently associated.


The reference date for the Resident Population Database is December, 31. Three annual exercises have been carried out so far.


MAIN STAGES IN THE CONSTRUCTION OF THE RESIDENT POPULATION DATABASE 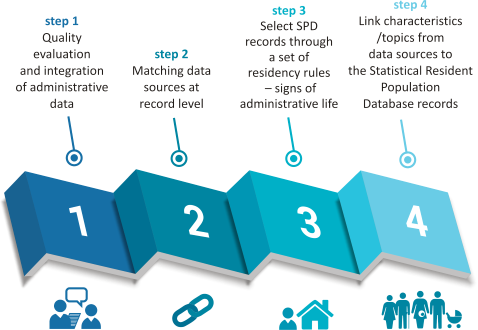 The Portugal resident Population Estimates provide the official figures of the resident population in Portugal that adopts the components by cohort method and applies the population census concept (currently anchored in the 2011 Census). Its calculation is based on the natural and migratory demographic components originated from other statistical operations of Statistics Portugal: live births; deaths; emigration and immigration estimates. 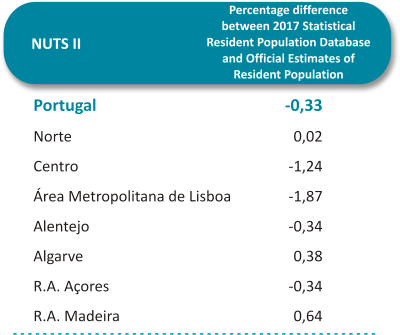 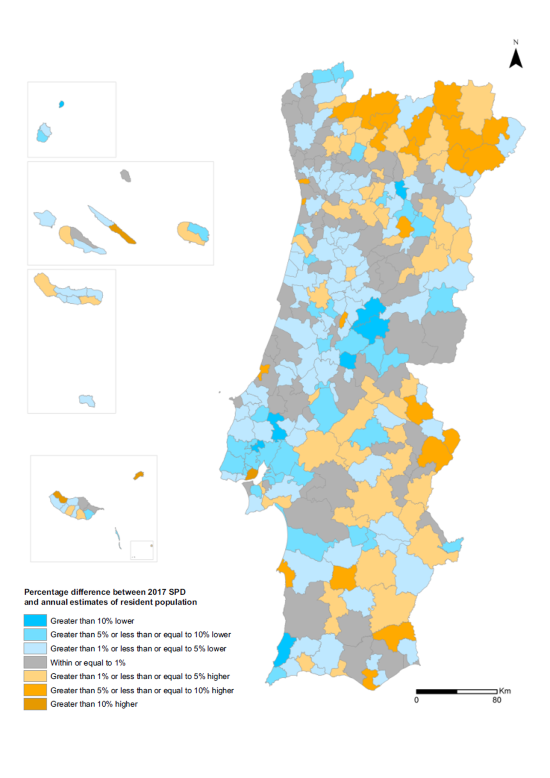 Combined with the geographical distribution, the Resident Population Database already captures part of the demographic and socioeconomic dimensions. For example, the differences in the age structures of the resident population from these statistical studies are negligible for most age groups. 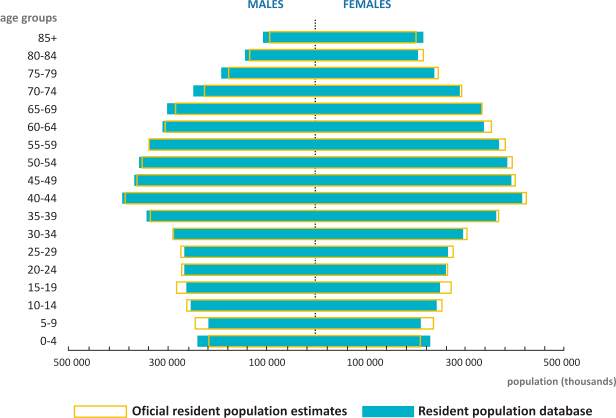 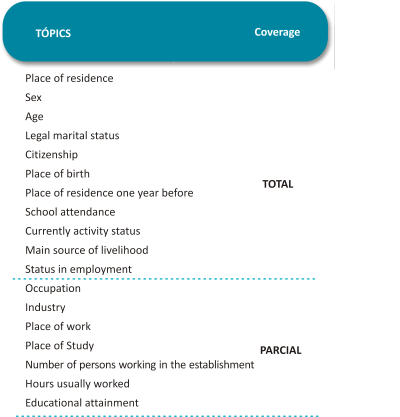 The set of administrative information currently integrated in the Resident Population Database has a high potential for the transition to a registered-based census model. However, several critical areas have been identified that make the immediate transition to an administrative model unfeasible in the 2021 Censuses:
The availability of administrative data is still incomplete, either due to the need for formal access protocols, or due to information that needs to be derived from the raw microdata. The case of family structures is paradigmatic, in which it is necessary to ensure access to data concerning affiliation relationships and subsequent treatment in order to apply the concepts of household and family nucleus.
It will also be necessary to analyze and treat the addresses and, through the geo-referencing of buildings, develop a 2 solution for the dissemination of population statistics by a geographical grid of 1Km
The Census with administrative data project is a strategic line of work for Statistics Portugal, capable of meeting the requirements of official statistical information. Ultimately, there will even be a continuous census that can be updated in an infra-annual period, provided that administrative sources allow such frequency.
The Resident Population Database provides an information structure that when integrated with additional data, for example on income and housing, will allow the creation of new statistical indicators and expand the possibilities of analysis (e.g., the incidence of poverty or of school dropout), with greater geographical, demographic and socio-economic detail.

INTEGRATION OF INFORMATION ON INDIVIDUALS, HOUSEHOLDS AND HOUSING 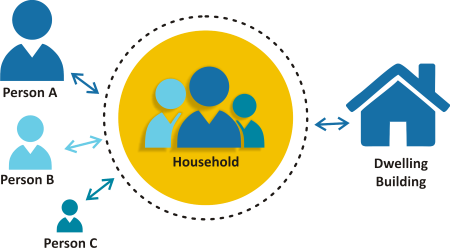 Statistics Portugal thanks the Public Administration Entities that contribute with administrative data and make possible the implementation of this project, essential for the modernization of the National Statistical System