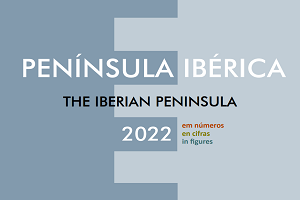 The Iberian Peninsula in figures
Portugal and Spain: The Iberian reality and comparisons within the European context - 2022
10 January 2023

In the period 2012-2021, the average age at which women have their first child increased continuously in both countries, always higher in Spain than in Portugal. The largest difference (0.9 years) occurred in the first year of the series, and the smallest (0.5 years) in 2015, 2016 and 2020.

GDP per capita in Portugal in the period 2012-2021 was always lower than in Spain, with differences ranging from 15 PPS to 12 PPS  until 2019. Since then, both countries have recorded falls in this indicator, which were more pronounced in Spain, so that the differences in the last two years of the series were -8 PPS and -10 PPS, respectively.