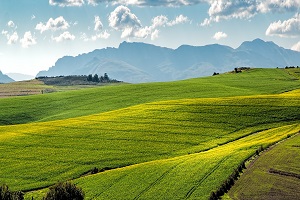 
Statistics Portugal publishes the first national results of the Agricultural Census 2019 (RA 2019), whose data collection took place between October 2019 and November 2020. At the end of March 2021, final data will be available, up to the geographic level of the parish and disseminated through the web portal (http://www.ine.pt/).
In RA 2019, 290 thousand holdings were surveyed, 15.5 thousand less than in 2009 (-5%). However, the utilized agricultural area (UAA) increased by 7%, reaching 3.9 million hectares (43% of the territorial area). The average size of agricultural holdings increased to 13.6 hectares of UAA / holding (+1.6 hectares of UAA than in 2009).
During the last decade, agricultural land use has changed, with a decrease of 12% in arable land, that has been more than offset by the expressive increases of permanent crops (+24%) and permanent grassland (+14%). There was a strong investment in the installation, modernization and irrigation of olive groves and orchards, mainly of berries, subtropical and almond fruits.
The corporation of agriculture grew, doubling the number of enterprises in ten years, increasing its importance in the productive structure, managing 36% of the UAA (27% in 2009) and producing 56% of the livestock population (41% in 2009). On the other hand, in family-based agriculture, the aging process has not slowed down, with the average age of single holders rising to 62 years (2 years more than in 2009).