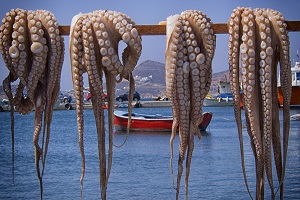 Fishing statistics
In 2018 the annual price of octopus reached the highest level of the last two decades. Internal consumption of this resource is strongly dependent on imports - 2018
31 May 2019


The octopus is one of the 6 main species caught in the last 20 years, and the one that has the highest first sale value over the last five years.
In 2018, the national fishing fleet caught 6 774 tonnes of octopus, in about 36.2% of total molluscs nominal catches and 5.3% of total fish landed at national fishery ports.
The annual price of octopus in 2018 (7.06 EUR/kg) has reached the highest level of the last two decades, increasing at an average annual rate of 2.4 times higher than the average price of total landed fish. Considering the most sailed fishery species, increases were also registered, namely for sardines (4.1 times), mackerel (13.5 times), horse mackerel (3.4 times), tuna (1.8 times) and European anchovy (1.7 times).
The incomes of auction sales reached in 2018, EUR 48 million, 25% higher than 2017 sales returns and 28% greater than the average sales value of the last 20 years. It should be noted that almost 1/3 of this income was generated by the ports at Algarve.
In 2018 the quantity of octopus imported (19.4 thousand tonnes) was almost 3 times greater than the catches, with the import value reaching EUR 172.6 million, more than 3.6 times the value obtained with the octopus landings in national fishery ports. The octopus catches are structurally insufficient, with average imports growing by 4.6%, between 2013 and 2018, while average catches registered a drop of 12.1%.

See the Publication and the Infographic