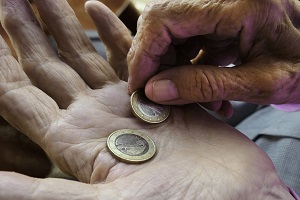 
The Survey on Income and Living Conditions held in 2018 on previous year incomes shows that 17.3% of the population was at-risk-of-poverty in 2017, one percentage point (pp) less than in 2016. The at-risk-of-poverty rate corresponded to the proportion of inhabitants with an annual net equivalent monetary income below €5,610 in 2017 (€468 a month).
The proportion of people under 18 at risk of poverty decreased again, to 18.9%. On the other hand, the risk of poverty for the elderly population increased to 17.7%, 0.7 pp more than in 2016. The poverty rate for the working age adults was 16.7%, 1.4 pp less than in the previous year.
For the first time, regional estimates are released. Considering the national at-risk-of-poverty threshold, residents in the Área Metropolitana de Lisboa were the least affected by the risk of poverty in 2017 (12.3%). This proportion showed the highest values in the Autonomous Regions of Açores and Madeira, respectively 31.5% and 27.4%. However, because there are significant socioeconomic differences between regions, regional poverty thresholds have been estimated, showing less steep differences in poverty proportions between regions (see Box).
Although monetary incomes in Portugal continue to be characterized by a strongly asymmetrical distribution, the main indicators of inequality decreased again in 2017: the Gini coefficient, in particular, was 32.6%, 0.9 pp less than in the previous year.
In 2018, downward trends are kept both for the rate of material deprivation (16.6%, 1.4 pp less than in 2017) and the rate of severe material deprivation (6.0%, 0.9 pp less than in 2017). The intensity of material deprivation reduced for the first time since the beginning of the decade.