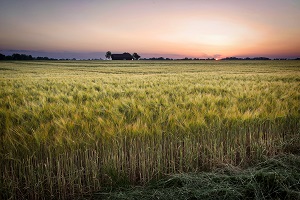 
Early estimates on July 31 point to a general decrease in winter cereals production (globally around -20%, compared to 2016), as a consequence of unfavorable conditions (very high temperatures and low levels of soil moisture) in which most of the growing cycle took place.
On processed tomato the prospects are good, with an expected increase on yield to about 94 tonnes per hectare (+15%, compared to 2016). Irrigated potatoes are also expected to increase their yields (+10%, compared to the previous season). As for rice and sunflower, similar yields to the previous year are expected.
The orchards in general have significant advances in the growing cycle, and 20% increases are estimated in apple, pear and peach yields, when compared to 2016 bad campaign. The vineyards also show a two-week advance and, despite some symptoms of water stress, a 10% increase in yield is predicted (vis-à-vis the previous harvest).