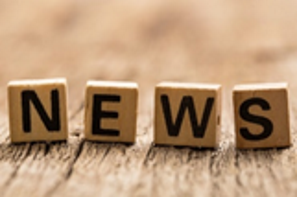 
We invite you to read the final Newsletter of our Presidency. This past semester has been busy and demanding, but also joyful, and it has turned into a very rewarding learning experience. We hope you enjoy our recollection of the key moments of this journey.

On 28 June, the Portuguese presidency organised the "Handover – PT to SI" event, passing the baton to its Slovenian colleagues.

The Trio Partners (DE-PT-SI), Eurostat and the General Secretariat of the Council (GSC) took part in this hybrid event, as well as representatives from the Perm Rep and from the Presidency of the Council of Ministers. The current presidency presented an overview of its main achievements and the forthcoming SI PRES shared the plans for their term. Participants had the opportunity to discuss on lessons learnt during the past twelve months of the Trio presidencies.

A traditional cabbage-shaped bowl was delivered to the Slovenian colleagues, handing over the agri-statistical files.

We thank our Trio partners for their cooperation and support, and we wish the utmost success to our Slovenian colleagues!

Adoption of a Council negotiating mandate for the EAA amendment proposal

In its meeting of 21 June, the Special Committee on Agriculture adopted the mandate for negotiations with the European Parliament pertaining to the proposal for a Regulation amending Regulation (EC) No 138/2004 as regards regional economic accounts for agriculture.

This mandate follows the agreement reached on 14 June at Working Party level, through an informal written procedure with the Presidency’s compromise proposal for the EAA amendment file (see the mandate for the act and annexes ).

The 5th and final CWPS meeting under the Portuguese Presidency took place on 18 June, in virtual format.

The SAIO proposal was the main item on the agenda, based on previously circulated Presidency's redrafting suggestions for articles 1-4, 6-11, and 13-14. The Presidency provided the information deemed necessary on some of the articles, and there was room to address clarification requests from Member States. The deadline for the submission of written comments on the redrafting suggestions was extended until 24 June.

In its final remarks, the Presidency informed about the way forward for the agri-statistical files and on the state of play of non-statistical files with statistical implications. The floor was then given to the Slovenian delegation, for the presentation of its plans and objectives for the forthcoming Presidency.

The Presidency thanked delegations for their professionalism and availability throughout the semester and wished the utmost success to the Slovenian colleagues.

The next CWPS meeting, under the Slovenian Presidency, is scheduled for 16 July.


Statistics Portugal and Eurostat are organising the European Statistical System high-level seminar on “Data from and for Society”, which will be held in virtual format on 3 and 4 June.

Statistics Portugal and Eurostat organised the European Statistical System (ESS) high-level seminar on “Data from and for Society”, which was held in virtual format on 3 and 4 June. The event had around 200 registered participants, predominantly from the ESS, but also from Other National Authorities, Sectoral Ministries, International Organisations (European Central Bank, OECD and UNECE), civil society organisations and private enterprises.

The event focused on the relevance and benefits of using public and privately held data in the production of statistics as a contribution to society and on enhancing the value of statistics as a public good. It was open to external speakers, who enriched the discussions with their views and experiences on the subject.

The high-level event was also an opportunity to increase awareness on the importance of accessing and using privately held data for statistical purposes at national and European level.

The speakers' presentations, as well as Commissioner Gentiloni's recorded message and speech of Minister Mariana Vieira da Silva, are now available (included in the "Programme" file above).

We thank all participants and speakers for contributing to this important debate with their lively and insightful inputs.

The 4th CWPS meeting under the Portuguese Presidency took place on 26 May, in virtual format.

The Council Working Party examined the annex of the SAIO proposal and has also addressed further clarifications on technical issues related to specific articles of this file.

The statistical implications of the Common Agricultural Policy reform were presented as an information item, considering its relevance for the agri-statistical files being dealt with at the CWPS. This information point was delivered by our guests from the Planning, Policy and General Administration Office of the Portuguese Ministry of Agriculture and from DG AGRI.

The next CWPS meeting, scheduled for 18 June, will be the last under the PT Presidency.


The 3rd CWPS meeting under the Portuguese Presidency took place on 21 April, in virtual format. The EAA amendment and the SAIO proposal were both on the agenda. Following the previous approach, the Presidency issued informal documents to guide the discussion on both files.

The examination of the SAIO proposal was again very lively and constructive, covering articles 6 to 10, 12 and 15 to 18. Discussions on this file are expected to continue in the next WPS meeting.

The Presidency took note of the comments shared by the Member-States and the Commission and will decide on the best way forward regarding both proposals.

The next CWPS meeting is scheduled for 26 May.


We invite you to read the mid-term Newsletter of our Presidency, taking stock of this challenging but very gratifying experience. With halfway to go, these are some of the highlights of the journey so far…

The Data Government Act was also on the agenda, as an information point, considering its relevance for the statistical community. The Chair of the TELECOM Working Party and a representative from the DG CONNECT of the European Commission were our guests and made a presentation on the DGA proposal and discussion process, followed by a Q&A time.


A High-level workshop of Directors General of the European Statistical System, on "Data stewardship experience within the ESS", jointly organised by the Trio Presidencies (Germany-Portugal-Slovenia) and Eurostat, will be held virtually on 31 March (9H45 CET to 16H30 CET).

Recognising the growing importance of a data stewardship role in a fast and ever-changing data ecosystem, the workshop will provide the opportunity to exchange experiences on national approaches to implementing the data stewardship, as well as to discuss the possible future role of the ESS and increase the relevance of the National Statistical Institutes in this context.

Three main sessions will be organised. The first session, chaired by Germany, will address issues related to the implementation of the data stewardship role and lessons learnt at national level. The second session, chaired by Portugal, will provide a space to discuss the data stewardship role at national and at ESS level, also in the context of the European Data Strategy, and possible impacts on the statistical legal framework. The third session, chaired by Slovenia, will discuss on new operational, methodological, and technological requirements that will challenge the National and the European Statistical Systems derived from the possibility of data sharing for a variety of purposes.

The Workshop conclusions will provide input to the June high-level event being organised by the PT presidency.

Expert meeting on Big Data Enabling Tourism Competitiveness – 8 March , 10:00 am (CET) | virtual
(organised by PT-PRES under coordination of Ministry of Economy, in cooperation with Statistics Portugal)


At this event, statistics experts, international organisations and tourism professionals will discuss the role of data in restoring tourism industry competitiveness, with particular focus on the potential use of big data sources. The management and planning of tourism information based on monitoring tools and indicators will be discussed. The objective is to create more and better information, through a sustainable approach ensuring the competitiveness of European destinations.

The outcomes of the event will be presented in a videoconference of Directors General of Tourism, in the afternoon.


The first meeting of the CWPS under the Portuguese Presidency was held on 19 February, via VTC. The Commission presented the regulation proposals on SAIO (Statistics on Agricultural Input and Output) and EAA amendment (Economic Accounts for Agriculture), as well as their Impact Assessment, which was followed by an initial exchange of views with Member States.

The next CWPS meeting is scheduled for 17 March.

Portugal in the EU


On 1 January 2021, Portugal took over the presidency of the Council of the EU. To mark the occasion, Eurostat published some information and statistics about Portugal. This infographic is complemented by the "Portugal in the EU" video, available at Statistics Portugal Youtube Channel (click here ) 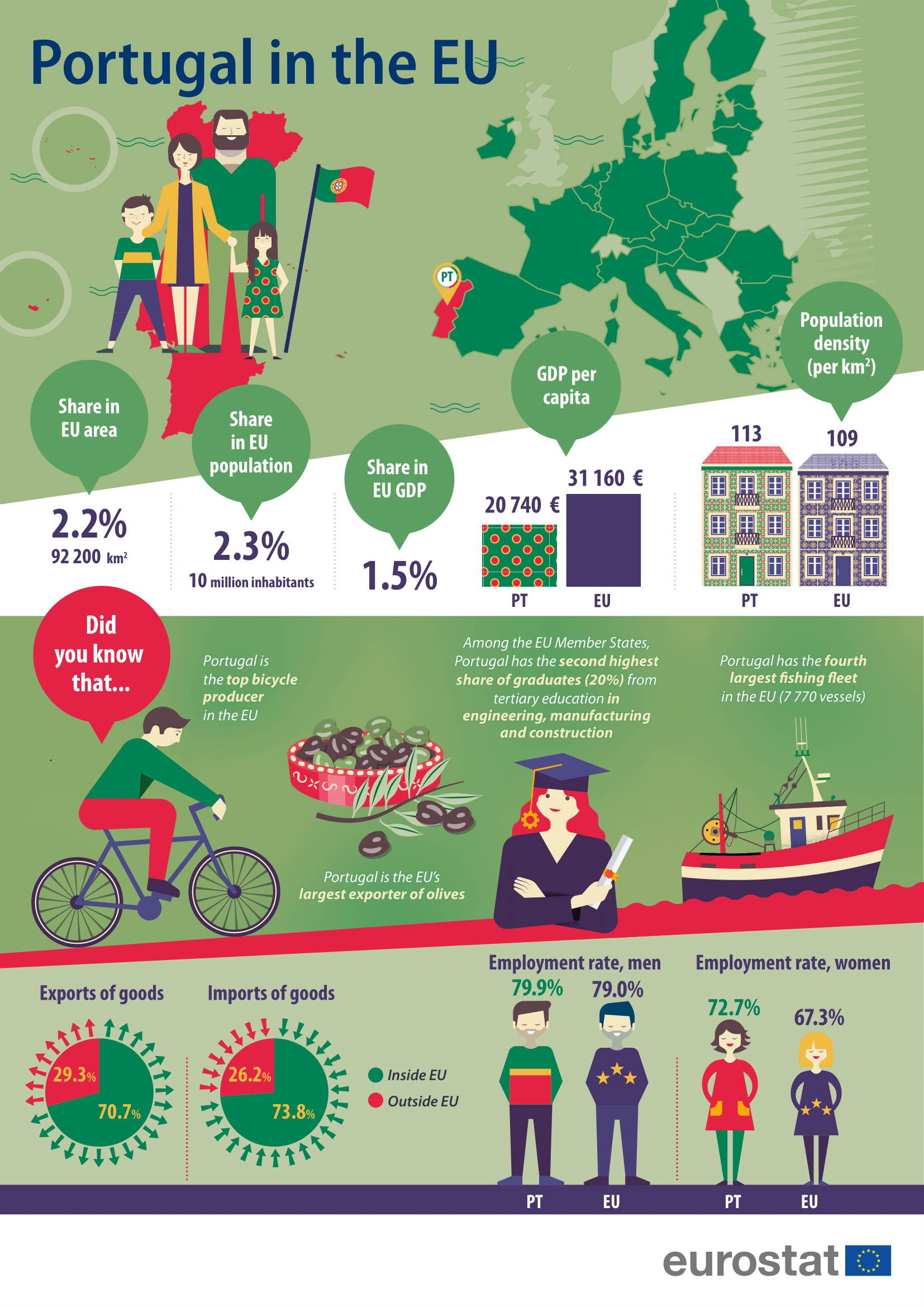 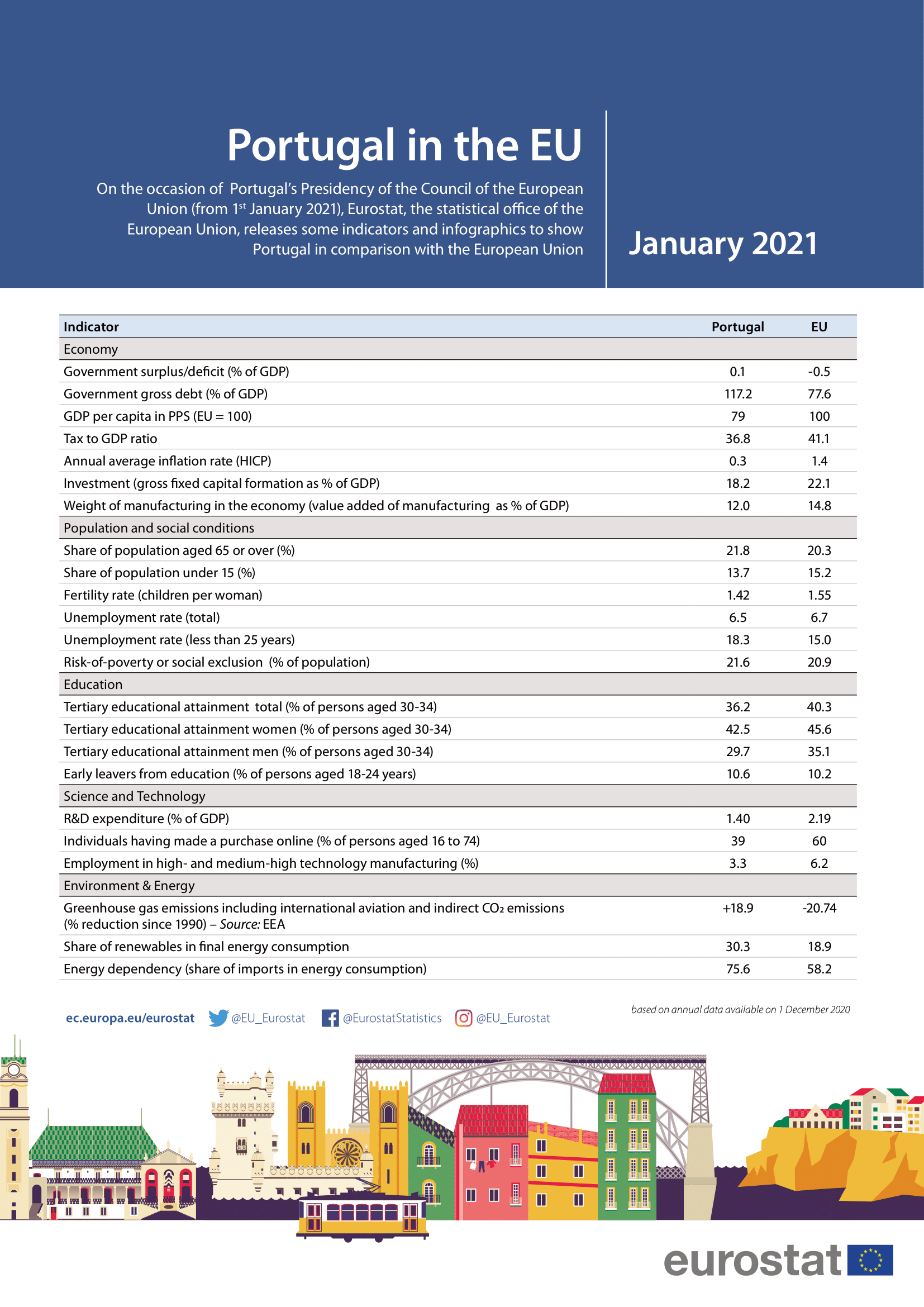 
The 1st of January marks the beginning of the Portuguese Presidency of the Council of the European Union. During the first half of 2021, Statistics Portugal will chair the Council Working Party on Statistics (CWPS).

Here you will find the latest developments of the legal statistical files discussed at the CWPS as well as information on the main events and achievements of the Portuguese Presidency on Statistics.

The Portuguese Presidency motto "Time to deliver: a fair, green and digital recovery" and the Portuguese logo, with 27 elements represented by a sun and a helm, guiding the Union on its future journeys, will inspire our work towards more innovative and agile European statistics in support of the Union’s social and economic recovery.