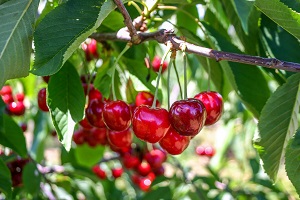 
Early estimates, on May 31, point to a very positive campaign in sweet cherry which, despite some difficulties in early varieties, should reach a yield above 3.7 tons per hectare, tripling the one achieved in 2020. Peach productivity will also increase to levels close to the average of the last five years. As for winter cereals, initial expectations have not been fully confirmed, although a yield increased is anticipated in common wheat, barley and oats (+5%) and the maintenance in durum wheat, triticale and rye.
The installation of summer crops took place without major incidents. In rice, with the possibility of using the seedbeds that had not been sown in the previous campaign due to rehabilitation works on the Vale do Sado hydro-agricultural project, it is estimated that the sown area will resume to 29,000 hectares. In grain maize, and despite the significant rise in prices on the international market, no increase in area is foreseen, compared to the previous campaign. Also in potatoes, the planted area should be similar to that of 2020. In tomatoes for processing, the prospects of a rise in the price paid to the producer led to an increase in the contracted area between the tomato processing industry and producer organizations, and it is estimated that the planted area should stay close to 16,000 hectares (+20%).